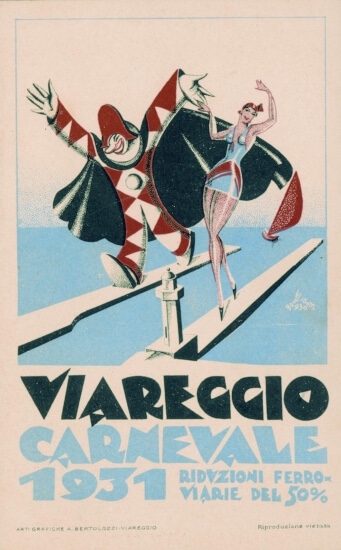 Happy Valentine’s Day from Casale 3 Danesi! We are preparing to send out our fresh, new bottles of olive oil this week. This month is also the great tradition of Carnival in Viareggio, a celebration along the beachside of Versilia, Tuscany. This colorful parade full of marching bands, decorated masks, theatrical costumes, and huge paper-mâché floats fill the streets as well as music.
The start of Viareggio’s Carnival was on Feb. 24th 1873 as a parade for the wealthy middle-class, but changed when locals donned masks as a sign of protest against the high taxes of the time. It then became a success featuring now different characters such as celebrities, sports athletes, influencers, and political figures.

Their harlequin mascot is also the official mask of the festival, Burlamacco. He wears a red&white patterned suit, bicorne and a black cape. Burlamacco is also always accompanied by his female companion ‘Ondina’ (Onda translates to wave in Italian, tying in his connection to the sea). This is considered to be one of Europe’s principal Carnival’s. You can begin the celebration at the ending of January all the way until the beginning of March.

Check out the links below for more information and about 2021 Viareggio’s Carnival which, for the first time, will be celebrated in Autumn!

Use coupon code: "NewOil22" for $ 4 off per bottle on your first order ! Dismiss